How to Fold a Pocket Square for a Wedding? 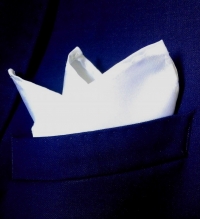 Pocket squares are a fabulous addition to a blazer or jacket suit. A stylish pocket square can make a big difference to the way you look. They are available in many different colors and patterns. Materials used to make them are linen, silk or wool. There are many ways to fold a pocket square. Match the look of the pocket square with a fantastic fold and make yourself look charming and sophisticated for wedding or a party.

How Can You Fold A Pocket Square?

A wedding requires a fashionable, yet formal look. There are many ways to fold a pocket square, for this kind of occasion the most basic being the Presidential Fold. When the fold is complete, what you get a band of fabric that lies horizontally on the top of the breast pocket. It’s most suitable for weddings with its formal look and understated elegance. Another fold with a similar formal look is the one peak fold.

If you want a dressier look, opt for the two point fold. As the name suggests, the fold results in the pocket square, having a two pointed edge set into a triangular fold. An enhancement of this fold is the three point fold, which showcases three triangular points in various angles, rising from top of the breast pocket. Though fashionable, it also renders a very sophisticated look to the attire. Another fold that equally attractive is the four peak fold. It appears eye catchy with its flaring four peaks which flamboyantly cover the top of the pocket.

There are many who would rather show the pocket square as what it really is … a handkerchief rather than an accessory that accentuates the attire. In such occasions, the unfinished fold is what’s needed. It showcases an unfinished edge on top of the breast pocket, clearly highlighting its functionality rather than displaying style.

Buy pocket square online from a wide collection of colors, designs, prints at AusCufflinks, one of the biggest destinations for men’s clothing accessories in Melbourne, Australia.

This is Why Your Workwear is So Dull

Contrary to popular belief, dressing for work doesn’t have to…

Mens Fashion – Make a Style Statement with the Right Accessories

Accessorising can be a difficult task no matter who you…

Men’s Accessories Buying Guide – Everything You Need To Know

Dressing up your look is important. You want to keep…